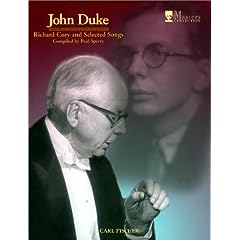 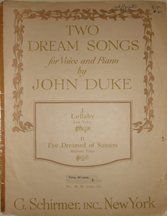 John Duke wrote 265 songs between 1920 and 1984, a period of over sixty years. After 1960, he wrote only songs. Half of his songs were written after his retirement from Smith College in 1967. Approximately one hundred of his songs remain unpublished.

His first published songs appeared as "singles" and in song anthologies. Until recently, many of the "singles" were out-of-print although theoretically available as on-demand copies from the publisher.

In 1983, the Society of the Friends of John Duke was founded at a John Duke festival at Wheaton College in Illinois. This Society, headed by Margarita Evans, sponsored the publication of four volumes of songs by Southern Music, Texas between 1985 and 2001. These four volumes issued 51 songs for the first time, and reprinted 10 songs previously out-of-print. This resurgence of interest together with a letter writing campaign from Society and other Duke supporters, motivated Schirmer, in 1989, to issue reprint collections (for high and low voice/original and transposed keys), with the addition of three unpublished songs (i.e., Elaine, Fragment, and Song making). Boosey also issued a reprint collection in 1994, as did Carl Fischer in 2002.

With the exception of Duke's first two songs (see box below left), all published songs should be available from their respective publishers as noted.

Southern Music (Texas) / Society of the Friends of John Duke

The Valley Music Press was established in 1942 by Ross Lee Finney, then a faculty member at Smith College, and John Verrall of Mt. Holyoke College as part of their music departments. For a number of years the press was supported by these two institutions. The Valley Music Press was unique because it was the only university press in the country devoted to the publication of modern American music. The press was renamed the New Valley Music Press (NVMP) after it became a member of Smith College Publications, severing its connection to Mt. Holyoke College. The NVMP ceased publication in December of 1996. All remaining imprints were returned to the composers or their heirs.