A distinctive feature of the Laurel Park landscape is the presence of the laurel plant seen here planted in a straight line parallel to the open pavilion at the center of the community known as the Tabernacle. This hedge-row type feature appears to pre-date 1990 based on an analysis of historic photographs, and may be older. It provides a good example of a designed landscape feature.

How Laurel Park Got Its Name

Before Laurel Park established its name and current location, it was called the "Springfield District Camp Meeting Association," and was located in Wilbraham, MA, and then Hatfield, MA. The members of the Methodist congregation were not completely pleased with either of the first two locations, and eventually voted to relocate once again to the current Northampton site. The 74 acres of land was purchased in 1871, and had to be cleared and graded for tents to populate the dense woods that grew in the uninhabited area. One of the shrubs that covered the ground in dense patches was mountain laurel. The site took on the nickname "Laurel Park," and the name was officially adopted a few years later. (7)

"As the park appeared way back when. This may have been taken shortly after the camp meeting ground opened but no exact date can be found." (5)

Nearly 150 years later, Laurel Park appears as if it was never logged, with tall oaks and pines ascending overhead and clumps of wild mountain laurel spread about the grounds. 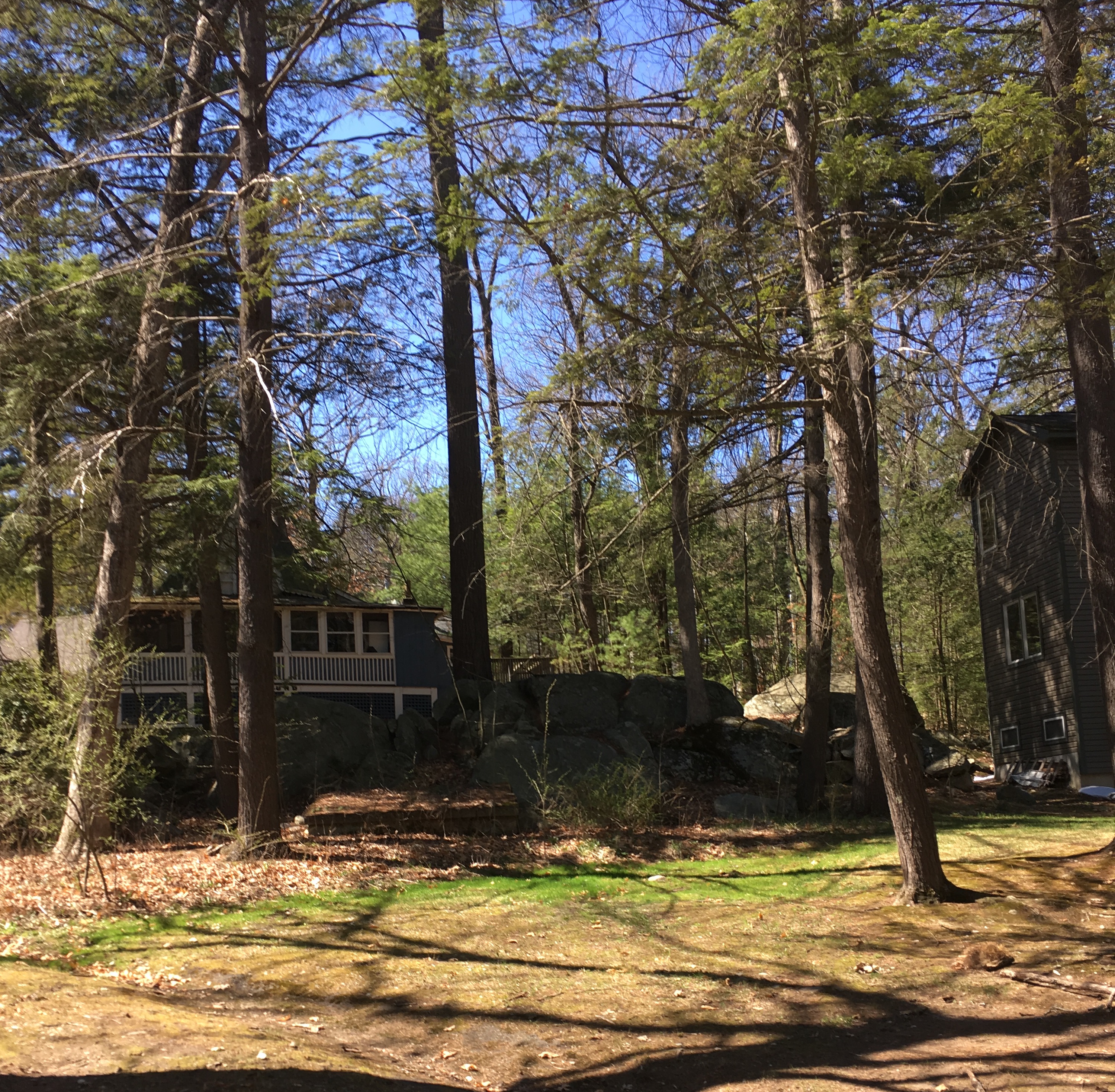 The dense natural landscape remains one of the most significant characteristics of Laurel Park. The pine needle paths and close knit cottages evoke memories of its history as a summer camp and shield the community from Route 5, Interstate Highway 91, and the greater outside world. 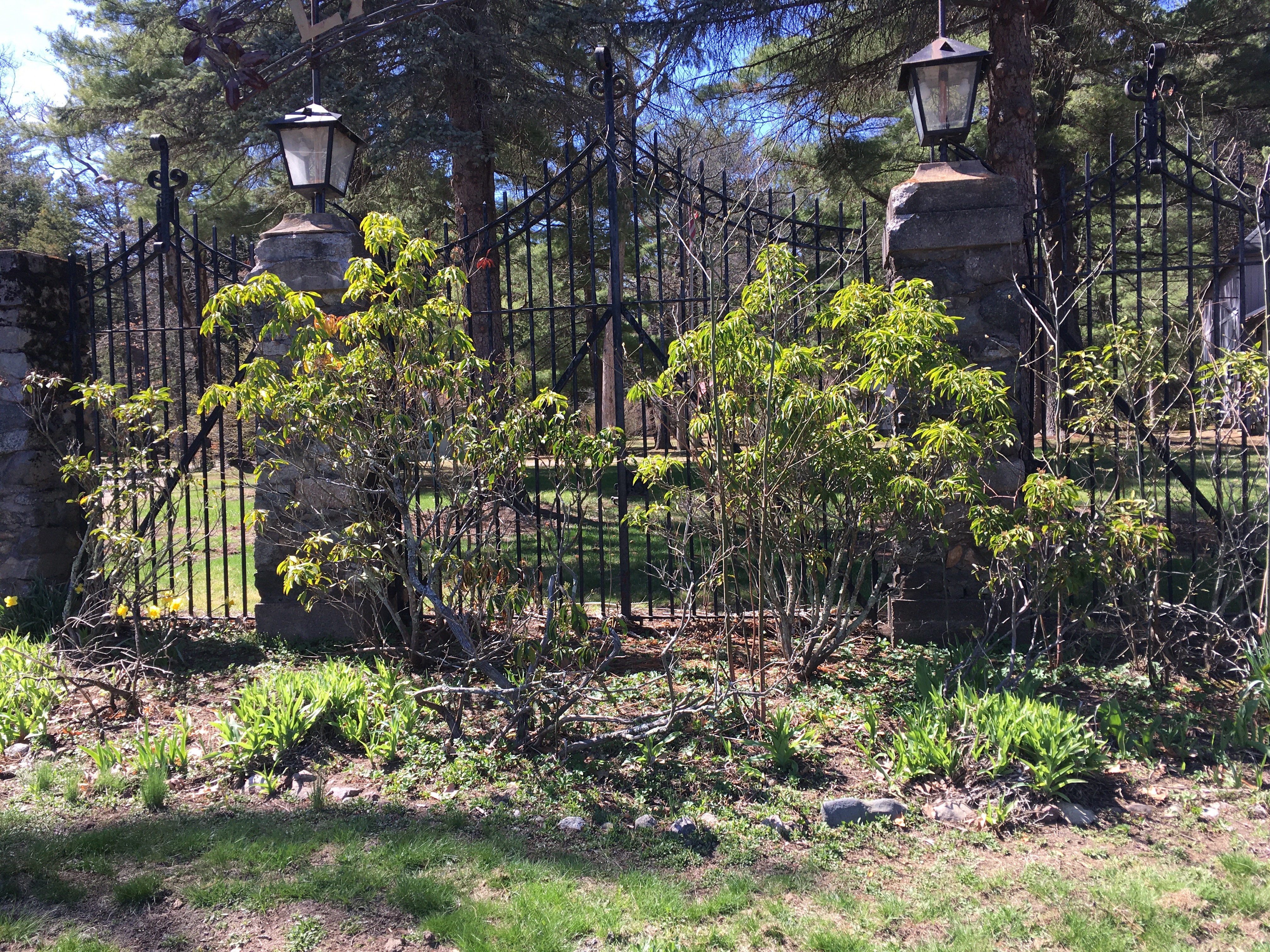 The monumental entry gates are one of the most prominent features of Laurel Park today. They feature laurel symbols on the overheard sign and abundant laurel plants on the King Street side. Apparently they have always upheld a great sense of mystery to the eyes of the outsider: "Travelers on Rtes 5 and 10 just north of the center of Northampton have often wondered what the story was behind the attractive gates of the little section marked "Laurel Park." -- Alice Manning, 1968 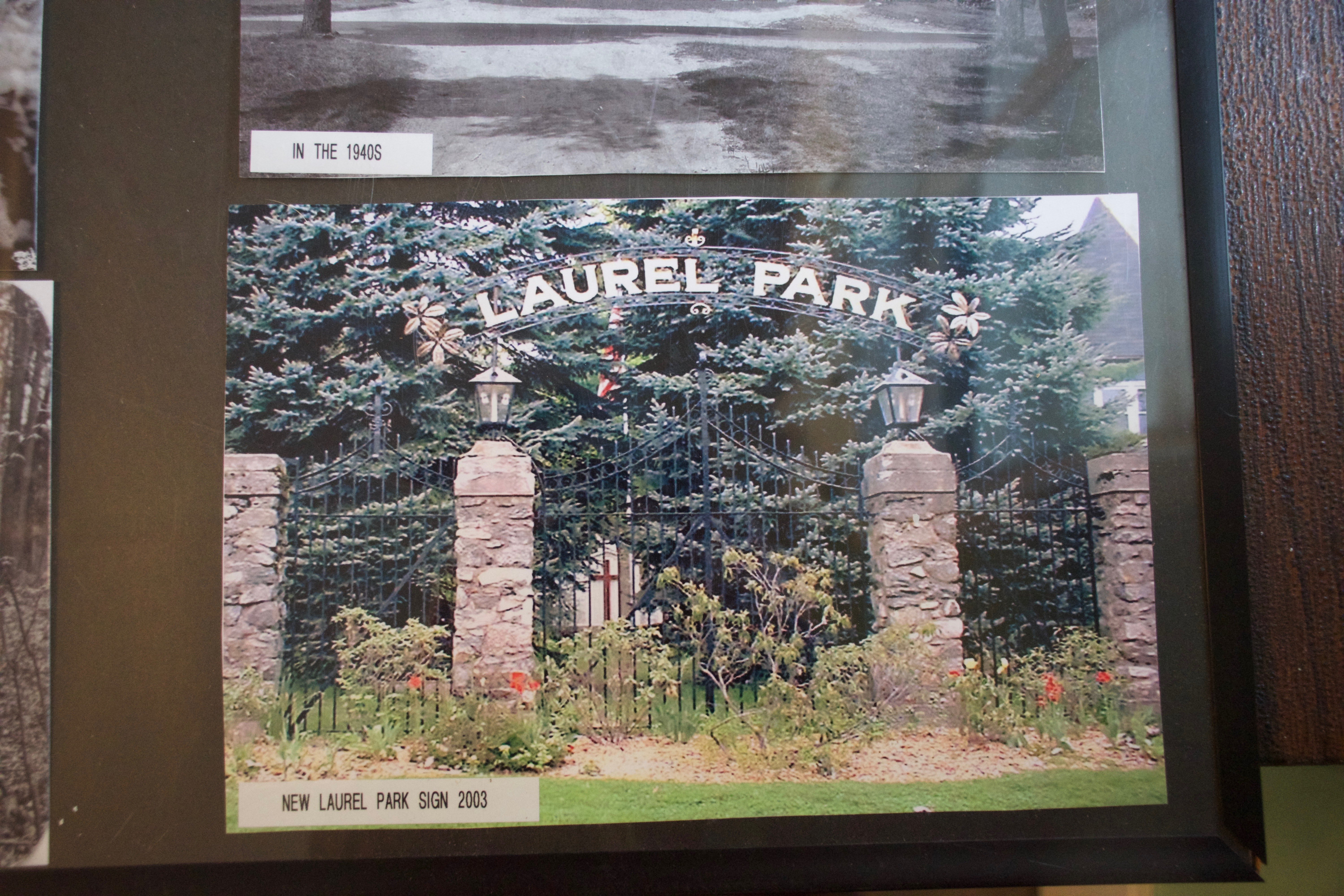 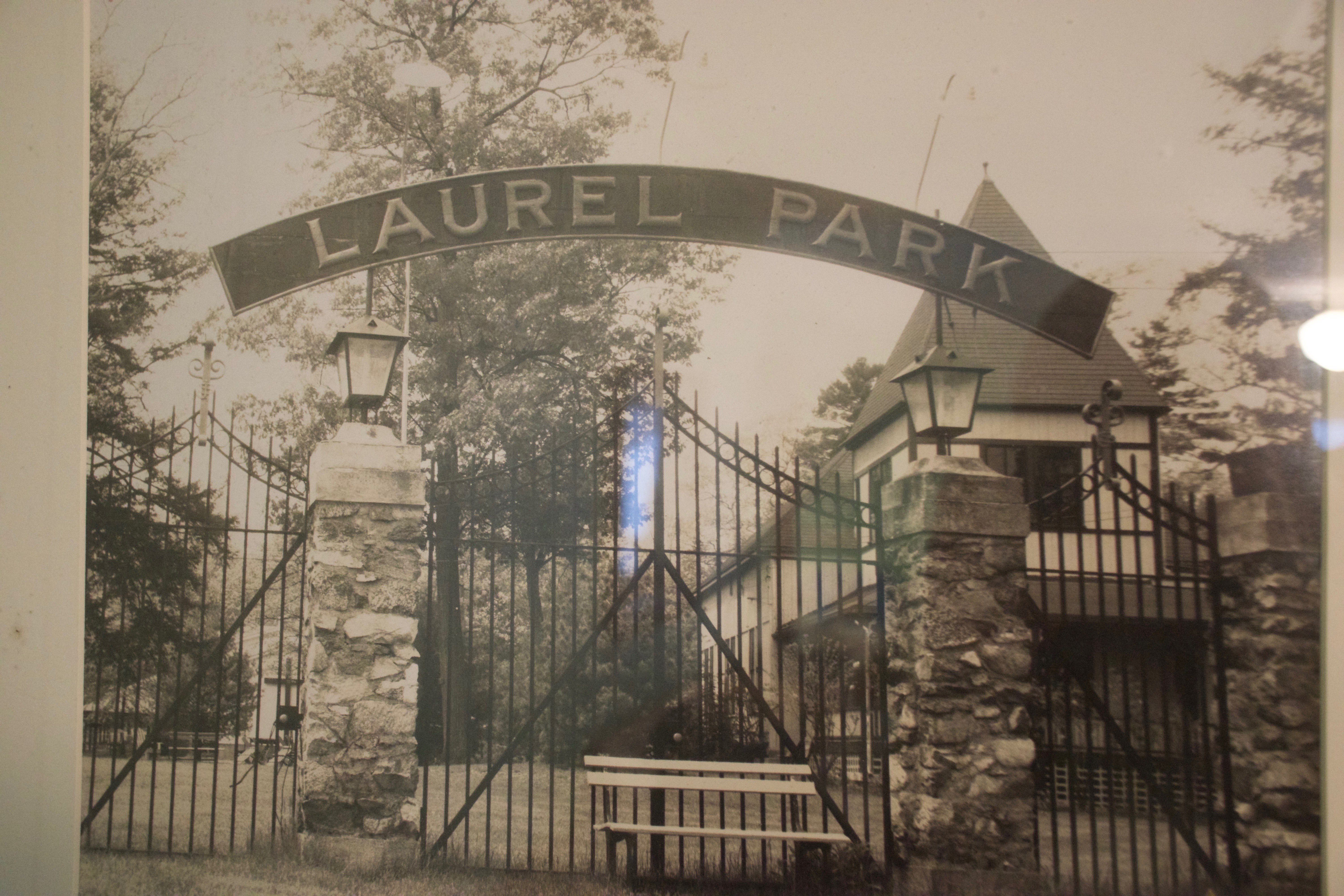 "The gates of Laurel Park, newly erected, stand impressive guard in front of the scenic area. The entrance is just yo the left of the gates and leads to a quiet world of quint cottages and impressive community buildings. The setting is enhanced further by the numerous trees and shrubs which surround the area." -- Alice Manning, 1968 (7) 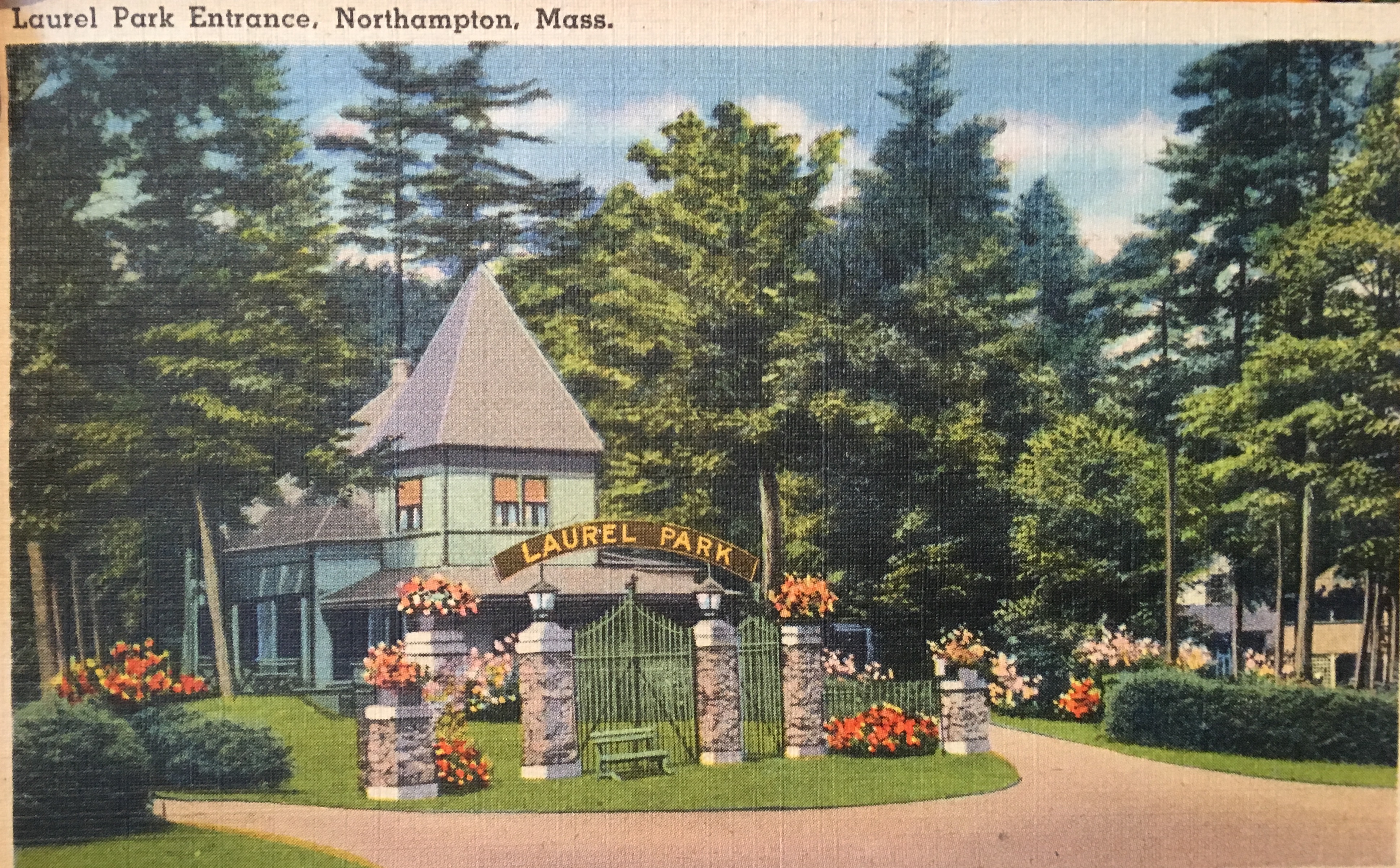 Colorful postcard of the entry gates without presence of laurel. Date Unknown. 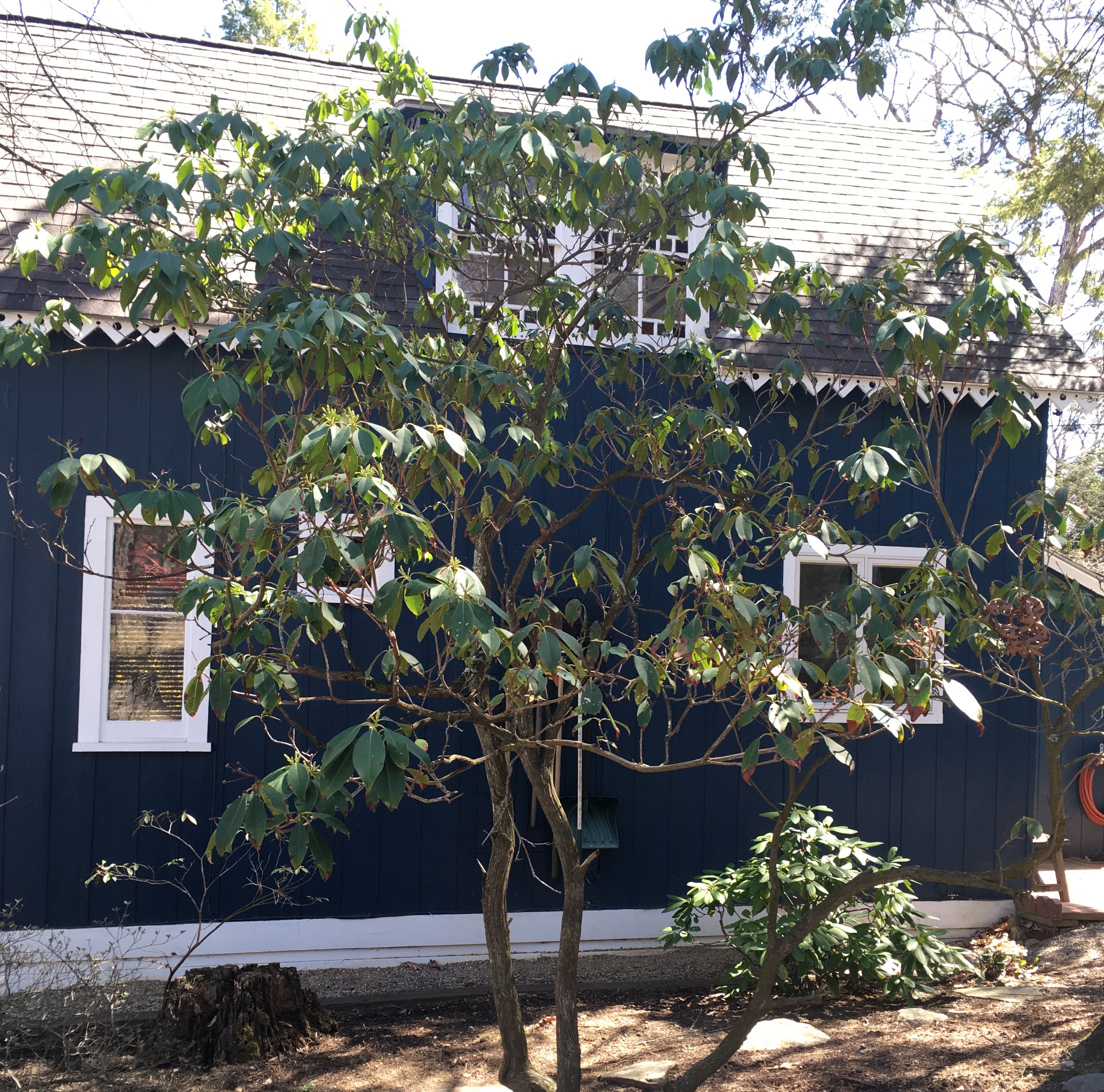 Laurel thriving in a backyard 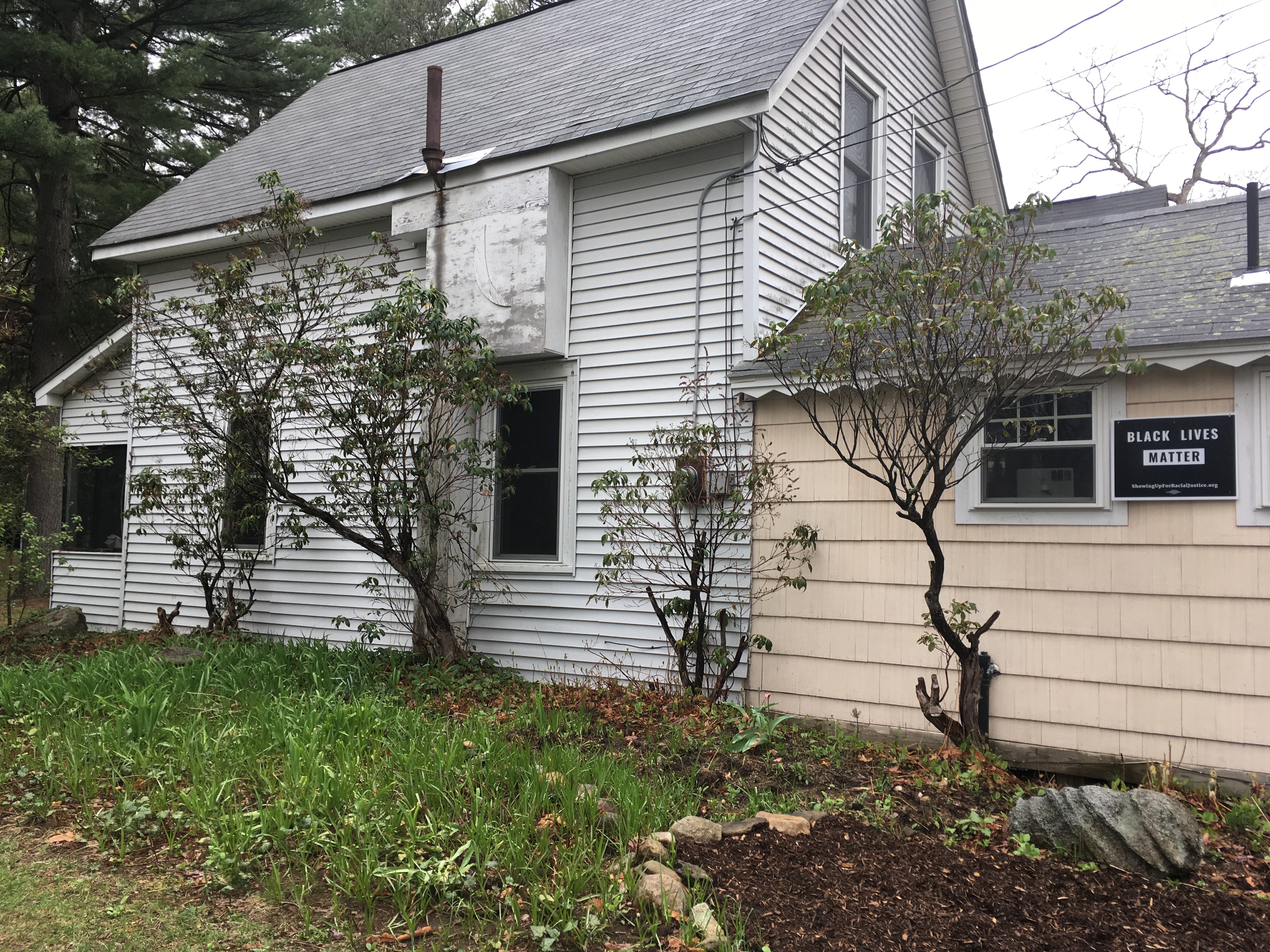 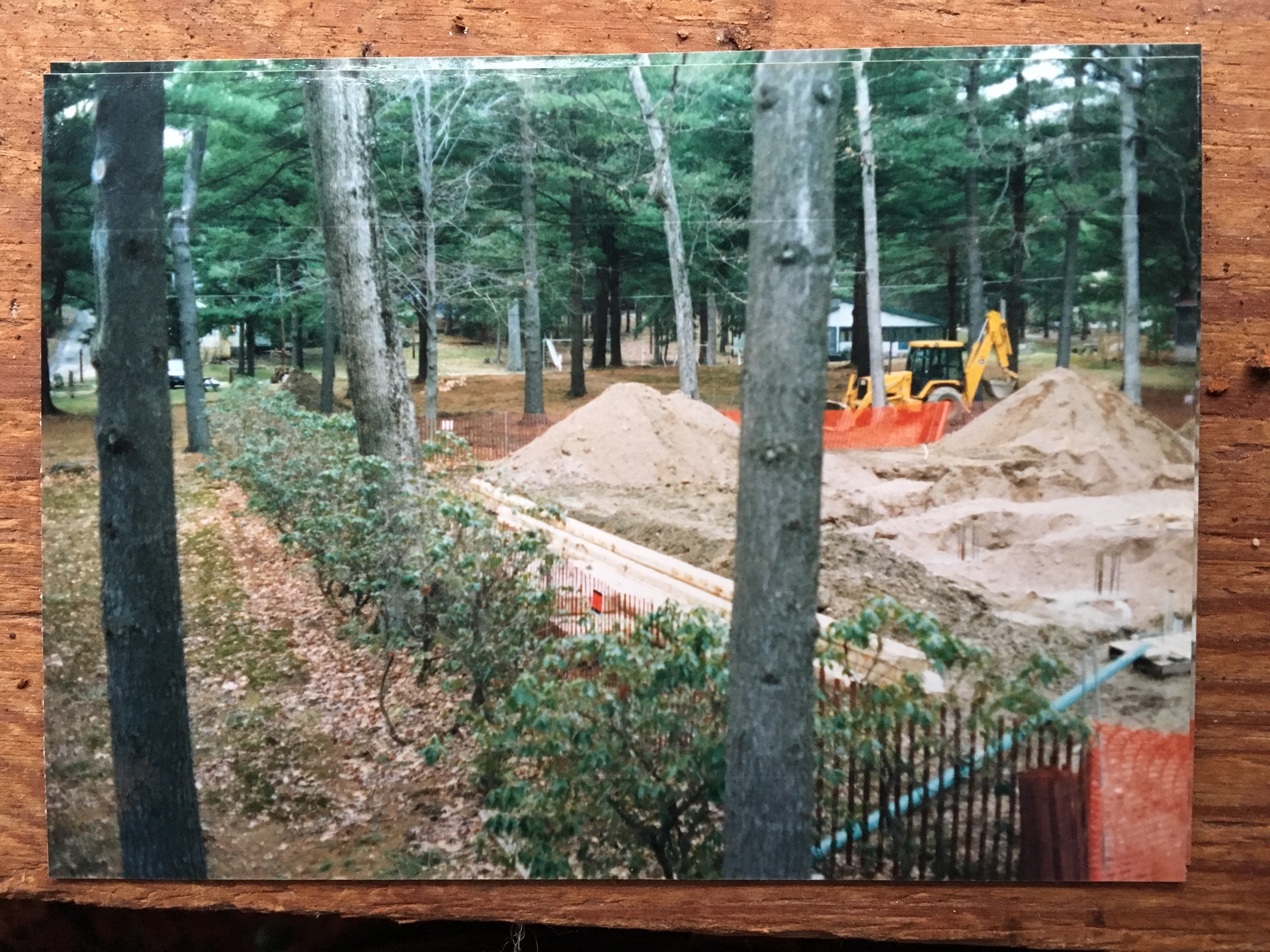 Line of laurel preserved during Tabernacle reconstruction in 1990. 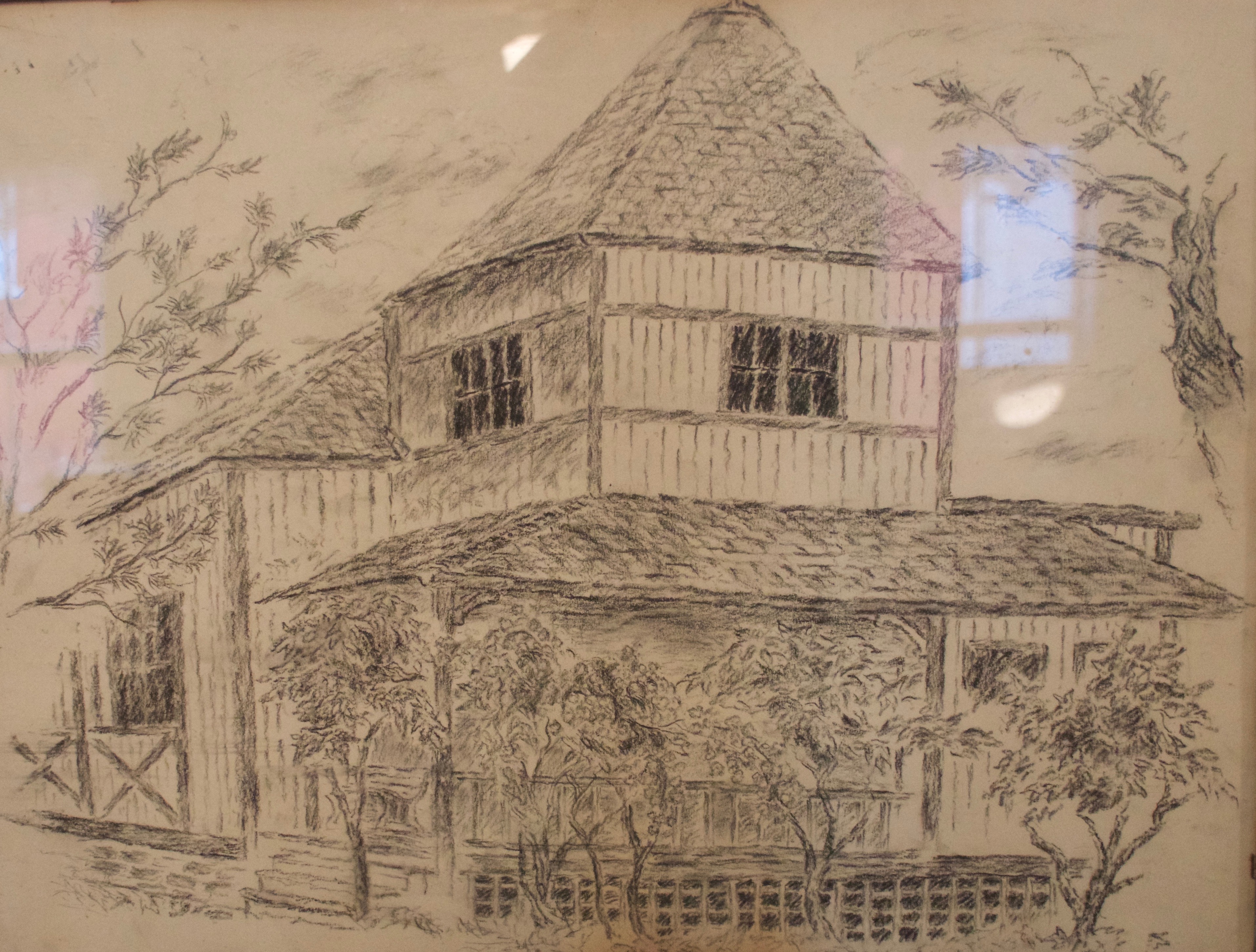 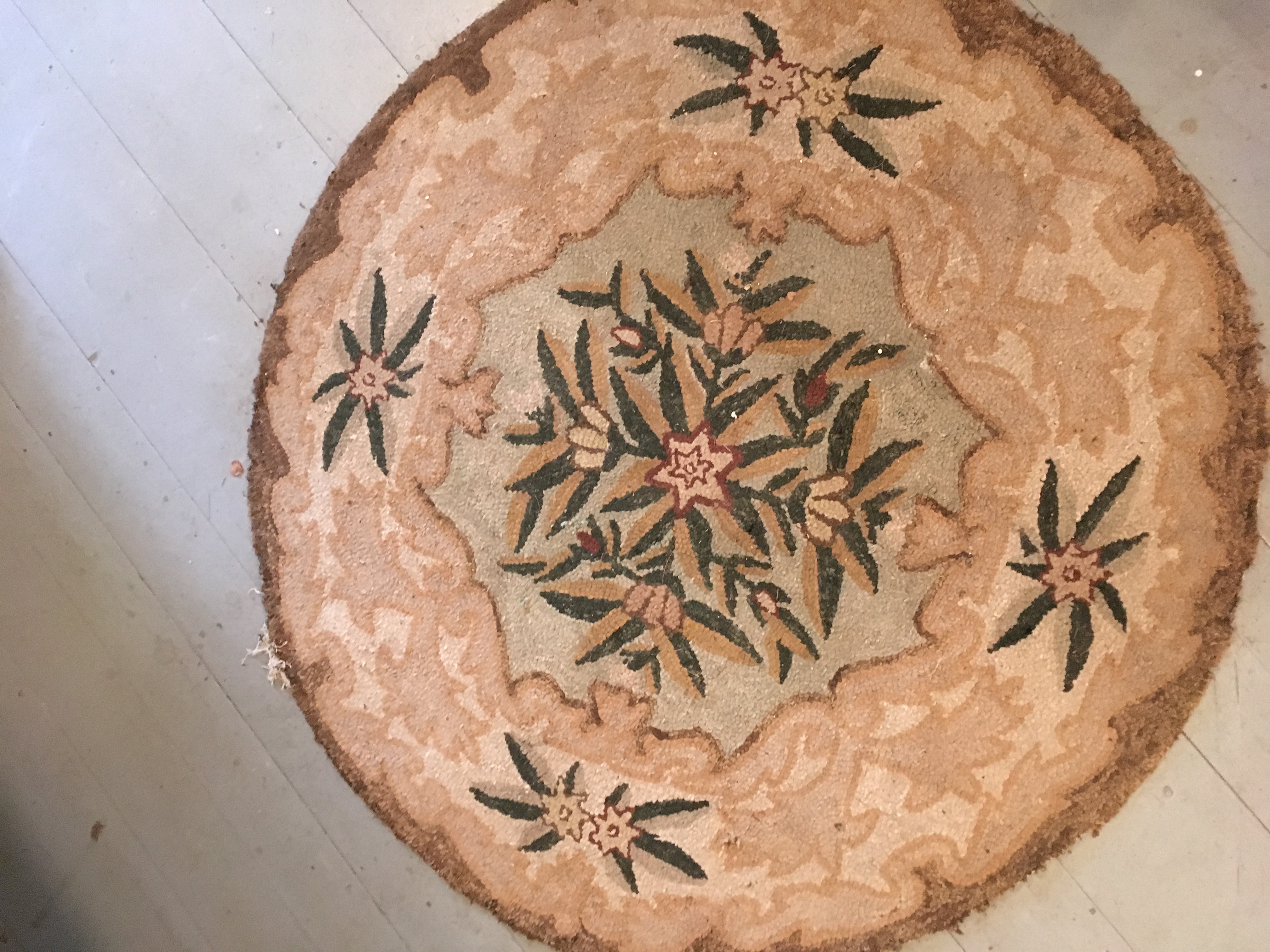 Rug with laurel flowers, found in the Chapel. 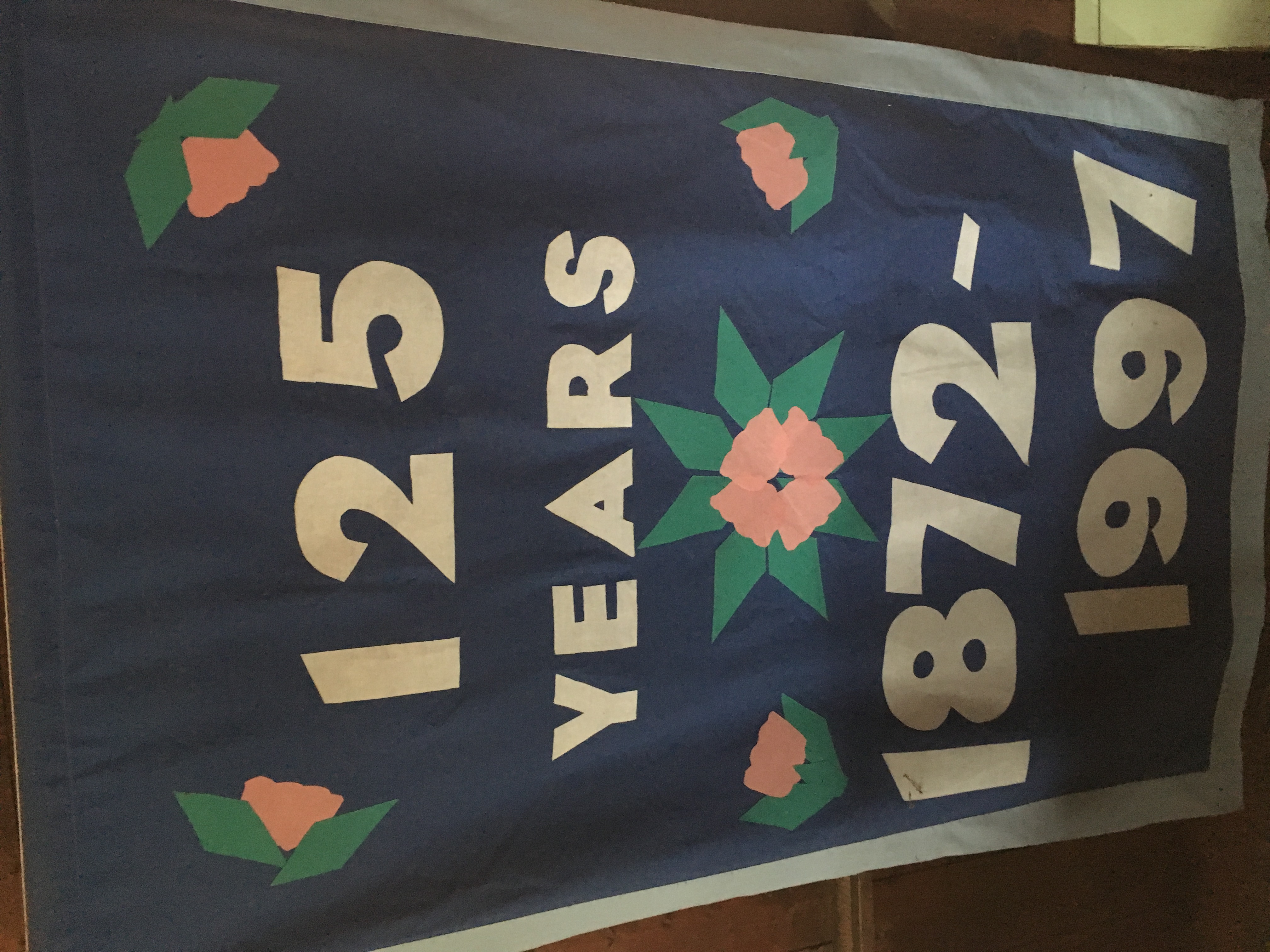 125 Year banner with laurel design, found in the Chapel. 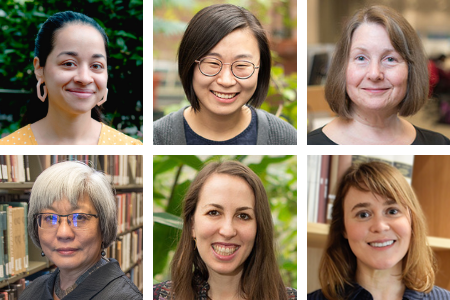 Did you know?
In ancient Greek and Roman tradition, the victors of contests were crowned with laurel wreaths because the leaves never wilt and symbolize eternal glory and triumph. (4) 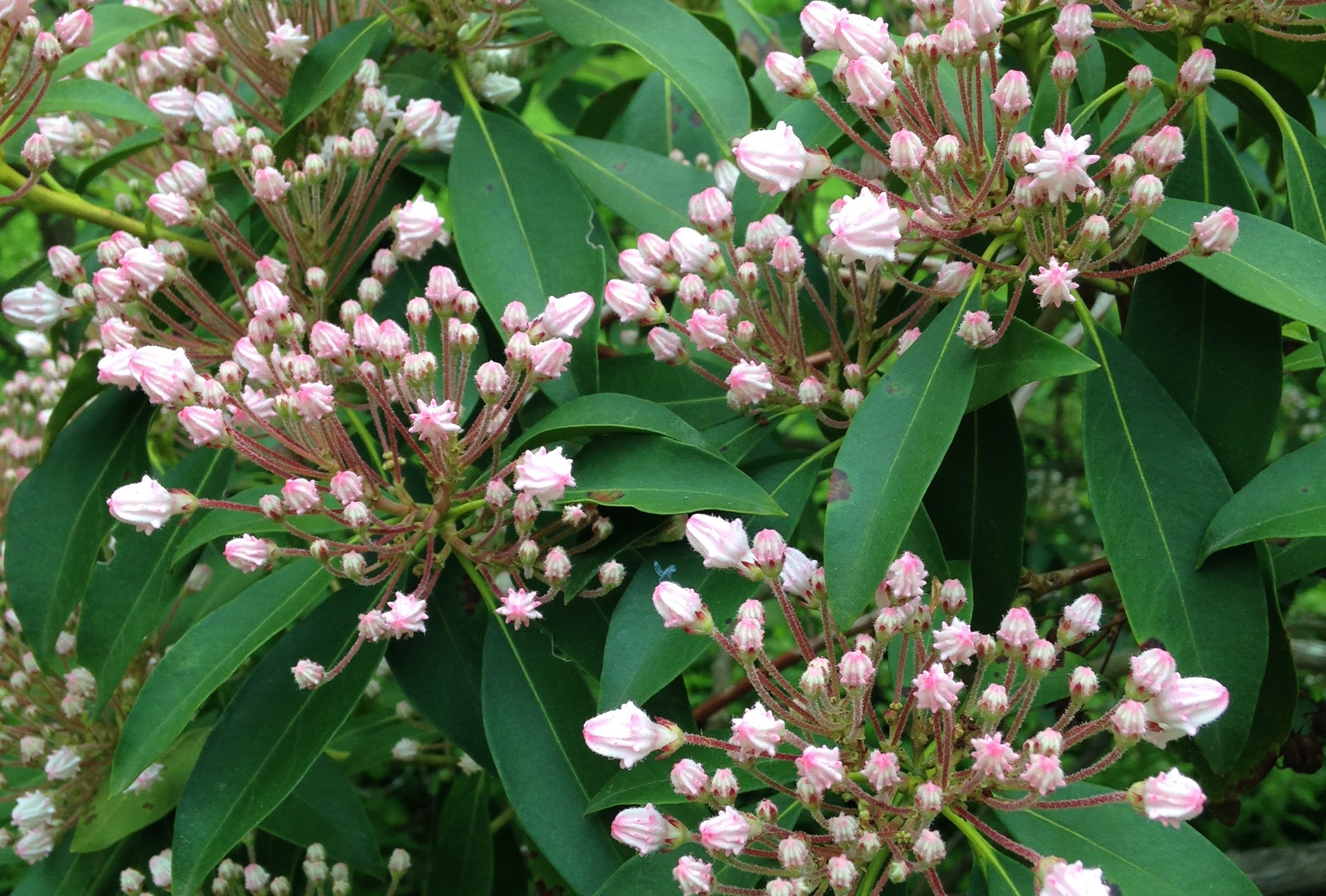 Photo of blossoming laurel at Laurel Park, by Steve Moga, May 2016 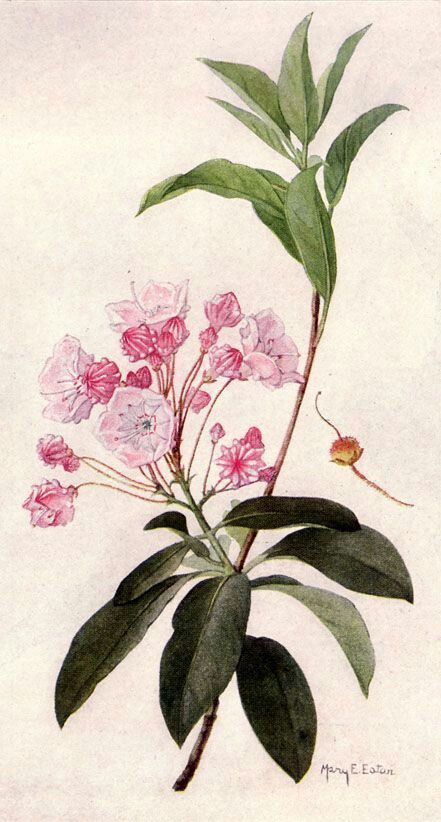 Traces of Laurel in Northampton Today

Mountain laurel is native to eastern U.S., where Native Americans used the sturdy branches to make wooden utensils. (6) It grows in conservation areas, reforested log sites, and uncultivated grounds, but can also be found and raised in garden plots.

Click on any of the tabs above to learn more about mountain laurel in present day Northampton.

Marian St Conservation Area, located just south of Laurel Park, has a similar historic landscape in that it has not been "greatly modified by human activities. Although previously logged and used for grazing (barbed wire tells us this), its thin, dry, rocky soils provide marginal pasture land, slow-growing wood lots, and make home construction very difficult." (3)

"Today, mountain laurel, witch hazel, American chestnut and hazelnut have sprouted to form a dense shrub layer. Come fall their yellowed leaves blend with the greens of mountain laurel and orangy-reds of the red maples to transform this area into a carnival of color." (3)

This is Northampton's largest patch of undeveloped land, where bedrock settles on the surface along with "dense thickets of mountain laurel. Covering tens of acres, the mountain laurel tangles often make walking a struggle. In fact, the combination of mountain laurel thickets, few paths, and rocky topography makes this upland area a rather confusing place for the first time visitor." (3)

"Not many miles from Springfield
There's a lovely little spot,
Where I love to go in summer
When the days are long and hot;
There I go for recreation,
'Mid the grand old forest trees,
Just to spend a short vacation
With the birds and flowers and bees.
I've a friend who has a cottage
Away from the city's dust and din,
When I am tired with work and worry,
She will always take me in.
I have friends who talk of travels,
Talk of science, and of art,
But, given me the wondrous hills,
And grand old Laurel Park.
There I take a little sewing,
With a hammock and a book,
But I leave them all neglected,
While I sit and dream and look
At the beauty spread before me,
At the mountains blue and strong,
At the meadows in their beauty,
And listen to the wild birds' song.
There we wander forth at morning,
There I set and dream at noon,
There is only just one shadow,
That we have to go so soon.
As we go with lingering footsteps,
There's a hope within my heart,
That when summer comes again,
We'll come back to Laurel Park."

For the Mountain Laurel

Here's what to admire: how it thrives
on adversity, accepts its condition of want,
and greens. Makes a limber bark, makes bright

ecliptic little coronated flowers. And speaks
in the vernacular register: a watershed.
In downpours, a verdant shelter: sheds water.

Canny scantling. It's good at what it's good at.
I'm trying hard to clear my head, to think
without language, to remember that whole life

Altogether, is clear that laurel has made an impact on the Laurel Park community. The plant remains hearty around the Tabernacle and as a prominent feature in many personal garden plots. It's beauty and meaning can be traced through history on rugs and banners, in poems, in distant memories, and rooted in the ground. 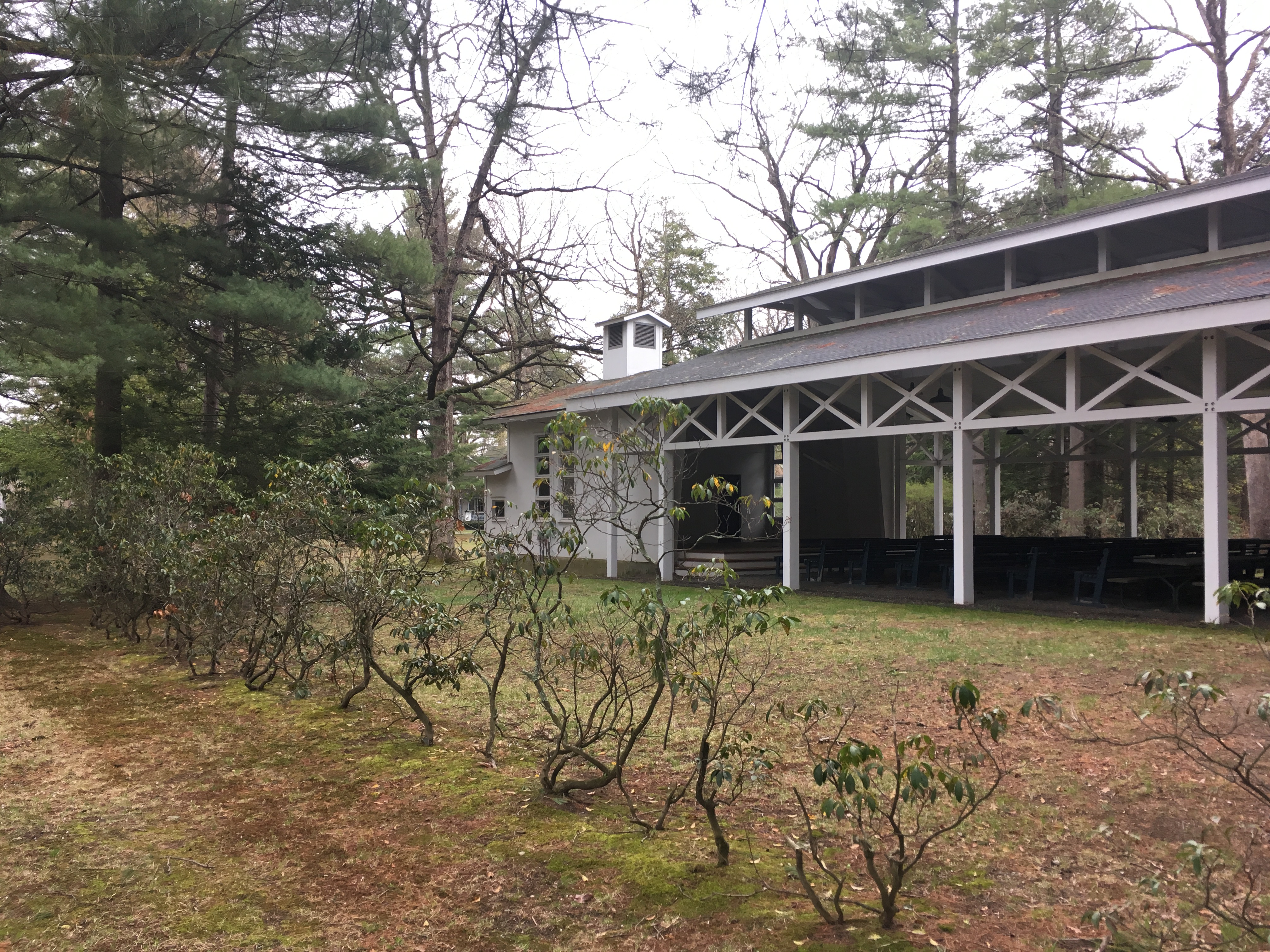